Saturday, March 12; Wear Green. Love is in the air, don’t speak too soon. 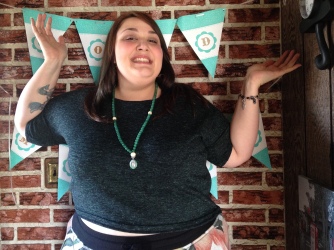 Well, I did it. For 7 days I followed the advice of Laurie Cabot, the official witch of Salem Massachusetts, and sported the right colours, did the right magic and held back when I was told to hold back. Not every bit of advice worked for me, but some parts of this challenge really helped me and even made me a better witch.

Let’s start with today, the final day. It was my first day at my new job ( at Mystical Mae Moon!) and since green is the colour of prosperity and money and my personal fave, I was all in. I went with something a little outrageous and grabbed a dark green crop top and these crazy tropical plant pants a friend got me for christmas and threw on a string of jade beads for good measure (or beauty, if you’re Mulan). I was so ready. Saturdays to me, are kind of a dark day. It’s a day to stay 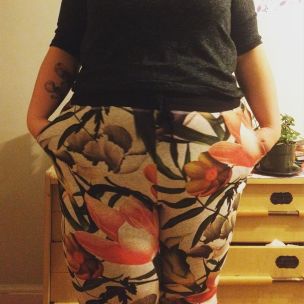 inside, get things done, and if I go out it’s usually at night. I stick with dark, cooling colours and lots of makeup. I’m usually very happy to be home and don’t really want to go anywhere. This saturday had to feel different, so happy greens and a bold pattern really worked with that.

As far as I can tell, all of Laurie’s advice came from astrological sources. The moon is in Taurus and that makes it a good day for career success, sticking to things for the long haul, and manifesting things in the real world according to Magical Fashionista. Taurus is associated with earth. so green is an excellent choice to help harness this kind of energy. I’m not very good when it comes to astrology (as Ellen Dugan says – it sounds too much like math) so I had no idea why love might be in the air until this popped into my twitter timeline:

Bring on the romantic trappings and over-the-top emotions! Loveplanet Venus pours itself into Pisces until 4/5. #lovescope #astrology

After finding this I found myself so impressed with how much magical information this woman manages to fit into 140 characters. It made me think of something a psychic told me once about tarot cards: “they’re compressing a whole email’s worth of information into a single tweet”. She was telling me not to get too hung up on what the cards are literally saying, and look more into what’s coming through those cards and she was right. Looking into why Laurie suggests the things she does almost makes me a little tired. Some it is stuff I know, and some of it is stuff that’s way over my head. It’s humbling and eye opening to take advice from someone so advanced, which is really impressive because she sends it out for anyone to see haha. It was easy to feel like some of her advice was directed right at me. How many people could there really be starting a new job today? It’s almost a bit, dare I say, spooky.

I will definitely keep checking Laurie Cabot’s twitter and taking her advice into consideration more often. As someone who already puts some magical intention into what I wear every day it was good to see another perspective. It’s easy for me to get into a rut and have, totally hypothetically, a tuesday outfit that I disregard other days of the week. Magic is easy, but it doesn’t have to be so simplistic. It can be fun and creative and unexpected, which what I love so much about it.

So check her out at @LaurieCabot for her daily advice, Magical Fashionista by Tess Whitehurst for an in-depth look at dressing magically and the magic of colour and pattern and Ellen Dugan’s Book of Witchery for daily correspondences with the cosmos, deities, plants, colours and more. Work this amazing information from these incredible witches into your own daily practice, but don’t get hung up over doing it “the right way”. Feel the energy of the day, the moon, and whatever you have going on. Maybe a fringed Beatles crop top isn’t something you can wear on a weekday (though really, isn’t it?) but dammit, you’re a badass witch and your style is all you – so why can’t it be magical?