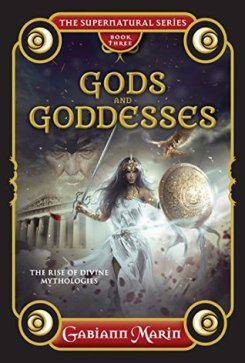 “Over the millennia Gods and Goddesses have taken on many forms, have given great gifts and unleashed furious punishments on those who worshipped and angered them. This book introduces the main gods and goddesses of the past; their myths, rituals and how they have influenced modern popular culture.- Discover the feuding goddesses of Babylon, – Witness the great love affair of the Egyptian creator gods- Travel with the West African goddess from the shores of Nigeria to the new world of the Americas- Meet the divine forces which may still dwell in the heavens, the mountains, rivers, oceans and stars. More than a historical glimpse into ancient cultures, Gods and Goddesses is a reference guide to the divine pantheons and an insight into how these ancient people and their divine creators live on in modern stories, films, practices and beliefs.” – Goodreads.com

I really loved this book, and will definitely be using for reference and recommending it to anyone who wants to learn more about some of the popular gods of pagan religions! I’m impressed to find a modern book on deities that includes the Voodoo Loa and the ancient Aztec gods right along with the Greeks, Vikings, and Egyptians.  Every chapter is also genuinely entertaining, with the author recounting a popular myth or legends about each of the gods! It’s not just a big list of bullet points, it’s a really fun read – especially if you’re a history nerd like me!

I talk a lot about being a secular practitioner on the podcast and blog so it might seem odd that I’d review a book about pagan deities. The truth is I love stories. Even as a young kid with non-religious parents with an obvious interest in witchcraft, I loved Bible stories and epic poems of ancient heroes. I loved Greek mythology, and not just Xena and Hercules (though… yes Xena and Hercules. I still watch both…), I checked out giant tomes on the Greek gods from every library I had access to a million times. I love morality tales and epic legends. I just do. I don’t think I need to worship at the altar of Odin or Osiris to see real value and even magickal inspiration in the stories.

Every chapter in the book covers the Gods and Goddesses from a different place, time, and culture but the book begins with the very basics of deities – the sun and the moon. The book explains how gods and tales of deities even began and what these two celestial giants meant to ancient peoples. Every chapter features a retelling of a popular or important legend associated with the gods from this culture like the myth of Macha in the Celtic chapter and the epic love story of Isis and Osiris in the Egyptian chapter. I loved this. The end of the chapter features a convenient reference chart, but it was great to have some genuine storytelling in this book. It made it very fun and easy to read!

In every chapter, the author tells you the tales of these cultures and deities and explains how they ended up in history as they did. How history changed the story or even viewed the characters. Every chapter explained how the Gods and Goddesses changed or evolved with the coming of Christianity, or how they came to “the new world” and changed because of colonization. In the Norse chapter it got a little bit over the top with the story of the “Goddess Eostre” which is just not… legit. But it’s a popular Pagan story. it’s clear that the author is not a big fan of Christianity, haha, but in all fairness, they really did do all the stuff she points out sooo… *shrug emoji*

In the chapter on Aztec Gods, the author also kind of over-emphasized how bloody and violent of a culture and religion it was, without sharing the positives about that culture and that time or even the reasons for this. In ancient Aztec culture death and sacrifice was seen as a necessary part of life, and even a necessary act of keeping the world going. Human sacrifice is definitely icky, but the Aztecs also created an amazing calendar, threw fantastic feasts, studied cosmology and their own version of astrology, and their sacred texts and intricate life philosophy is every bit as vast and advanced as the ancient Greek civilization. They regularly used poetry, art, and deity impersonation to bring on a better understanding of the unifying force that linked everything in existence.  Cool, huh?

For these reasons, I gave the book 4 out of 5 stars. I was a bit disappointed in this.

That being said, the chapter on the Voodoo Loa was so beautiful I honestly cried. It told the story of the goddess Oshun watching in horror as her children were stolen in ships and taken away across the sea, and cut off from her. It then explains how she listened and waited, and found new ways to connect with her children in their new existence where they struggled so much. In secret ways that the slave masters wouldn’t divine. Unlike many other books geared toward pagans, this book does not shy away from the role slavery and colonization played in the evolution of religions/practices like Voodoo and Hoodoo and Santeria. This chapter was my favourite and featured amazing pictures of ancient African artifacts and even Veves for some of the Loa. The descriptions of some of the Loa were a bit simplistic, but as an overview, it was so well done and showed so much respect for Voodoo. I am still so so impressed.

Finally, the book is just gorgeous. It’s a small hardcover, has nice thick pages, and an attached ribbon to mark your place. The whole book is filled with pictures and artwork from ancient times and gives full sources and notation so you can learn more on your own. The cover features a badass warrior goddess going into battle who likes a lot like Gal Gadot as Wonder Woman, which I hella respect, and many chapters comment directly on the roles of women in these ancient religions. I loved it, and I highly recommend it to anyone who is new to deity worship and wants some background, or anyone who just likes ancient history and spirituality.

Get it from Wesier Books here (North America Only)

One thought on “Book Review of Shadows: Gods & Goddesses by Gabiann Marin”