Jacki Smith, owner of Coventry Candles, one of the largest suppliers of magic candles in the U.S., has been crafting magic candles for more than twenty years. In Coventry Magic with Candles, Oils, and Herbs, she shares the history of candle magic along with the recipes, spells, and divinations anyone can use to increase love, prosperity, luck, and abundance.
So many times what we think is the problem is only the symptom of the bigger problem. Jacki Smith uses the humor of her own life experiences to show readers how to sort through the traps and tricks they’ve laid for themselves. Her self-evaluation system helps ferret out the underlying issues and beliefs that can often sabotage magical spells. The book helps readers get to the meat of issues and solve them in a magical, life-changing way.
Coventry Candle Magic will be an invaluable reference for beginners as well as experienced magic practitioners–the ultimate candle magic reference book. – Amazon.ca

Today’s Book Review of Shadows is brought to you by International Women’s Day! I chose to review this book today because the author of the book, Jacki Smith, is a witchy woman I genuinely admire. She started Coventry Creations Candles, the largest supplier of metaphysical and magickal candles in North America 25 years ago when she was just in her early 20s with her sister. Not only do the candles actually work (really!) but Jacki herself is all about helping and empowering other people. She works closely with other female run metaphysical stores and female witchy authors. If you’re in the Windsor/Detroit area she’s also a local witch and hails from Ferndale, Michigan (which rocks!) where she operates a store that always full of amazing and knowledgeable women.

Let’s start with the main topic of this book – candle magick. Candles are an integral part of witchcraft and always have been. Candle magick is often a place many people start because it can be as simple as lighting a candle to help yourself focus, but as people usually find out later there’s so much more to it than that. This book goes through everything from choosing your candle, colours, herbs and oils and fragrances, candle shapes, what different wax and smoke patterns mean, how to carve your candles etc. If you’ve got questions about magickal candles, this book will absolutely answer them all. On that alone this book would rank high but what really pushed it over the top for me is the overwhelming personality of the book.

On the back cover there’s a quote about the book by author Dorothy Morrison that really says it best: “Coventry Magic isn’t just another good book outlining magical practice. It’s the best damned self-help book on the market-bar none!” As you read the book the story of Coventry Creations begins to unfold in small sentences and ‘Life Lessons from your Aunt Jacki’ – Jacki was in a very bad relationship with a man with some seriously predatory behaviour and started Coventry as something to keep them both busy and him out of her hair. After a few years she realized she had a responsibility to this business she’d grown that had taken off – and the crop of young women he’d hired to work in the store. She cut him out, took responsibility for her future, and decided to start creating her own reality.

The first few chapters of the book talk about positivity, ethics, responsibility, and empowering yourself with your magick. Before she even talks about candles she tells you how to do magick! Though the advice is not 100% secular, it’s also not overwhelmingly “religious” and the mentions of deities never feel forced on you. The book is all about making your own choices and using magick to build the kind of life that will work for you, no excuses! She goes in-depth into elemental magick and talks about grounding in a way that, after more than 20 years of being a witch, totally blew my mind. I never really got grounding until I read Jacki Smith’s method that connects to all of the elements! Now I use this technique nearly every day whether I’m doing candle-specific magick or not.

This book, and Ms Smith’s candles and practice are very inspired by Hoodoo and American folk magic so not only will a lot of you learn something new from it, this book functions as a great intro to incorporating some of that into a more modern practice. There’s also an incredible list of herbs and plants to use in your magic near the back of the book that leaves me crossing my fingers hoping Jacki’s got an herb magick book in her future! Honestly, this book could change the way you do a lot of your magick and how you figure out what kinds of magick to even do in the first place. For those reasons I recommend this book to everyone no matter how long they’ve been practicing.

I also recommend experimenting with Coventry candles and finding out the next time Jacki Smith will be doing any sort of public talk, class, or appearance because she’s a fantastic speaker. Plus I mean come on… 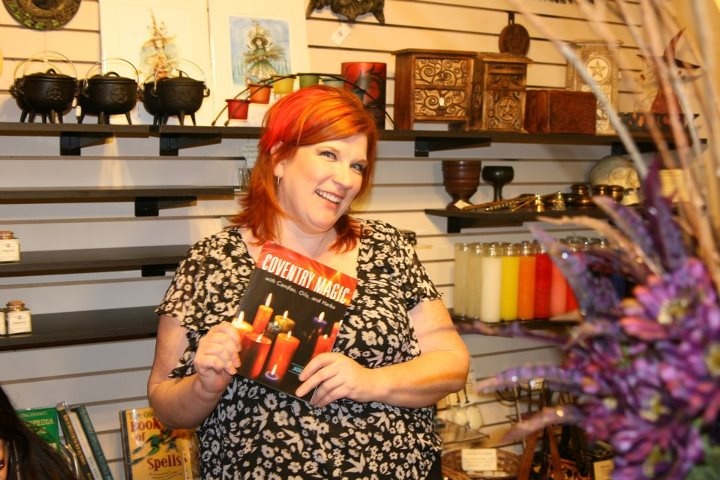 If you live in or around Ferndale and want to support a local business that works hard to empower women and witches, check out her store The Candle Wick Shoppe at 175 West 9 Mile where they also do awesome events and classes.

Jacki Smith also co-wrote DIY Akashic Wisdom with her sister Patty Shaw. I haven’t finished the book, but I saw Jacki teach a class on the Akashic Records that changed my life. This book is already on my shelf and will be reviewed in the coming months!

View all posts by Paige Vanderbeck