It’s only been a few hours but as it is a Sunday, a few hours is plenty of time.
Laurie’s advice today was simple and fairly easy to follow:

I have a burgundy T-shirt, tons of small quartz crystals I could carry and I was already at my computer.
Doesn’t sound life changing, does it?

Wondering what I’m talking about? Check out Living Life According to Laurie Cabot’s Twitter Account: An Experiment 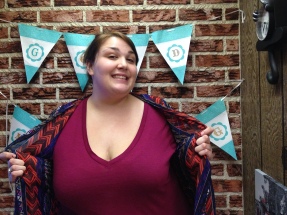 Well first, I had to wash that T-shirt, this made me do not only my own laundry, but my housemate’s as well since I was already doing it. This lead to my getting an invitation to a good Friday shindig, since we actually chatted on my trips to the basement. I’m also set for laundry for the week which means no other trips down there!
Since I don’t have a single pair of pants with pockets, the only place I can carry stones is in my bra. Wearing a bra on Sundays is an almost never, so that was different; and carrying the quartz made me feel energized and ready to get shit done.
Instead of just sitting in front of the TV in a muumuu, I researched and planned out my next podcast episode, and am now writing my second blog post for the day!

I could feel that quartz lighting a fire against my chest and got restless, so I started cleaning the house. I dusted! I have the broken trinket to prove it. Now I have a clean living room to read in for the rest of the night, clean clothes for the week, no garbage to put out tomorrow night, and the full layout for a podcast to record on Tuesday. Jimmy Hoppa even has a clean cage.
Maybe following Laurie’s advice didn’t change my life, but it changed my week already.

So why burgundy and quartz, why is today for research? I’m a big fan of daily magic, and especially of dressing for magical success. In fact, this burgundy t-shirt is a regular staple for Tuesdays which, like sundays, are aligned with the element of fire. I learned this from Ellen Dugan’s Book of Witchery and Tess Whitehurst’s Magical Fashionista – two books I highly recommend if you’re into getting magical every day. According to Magical Fashionista “burgundy mixes the earth element with a deep, smoldering fire energy. It’s a red that blends its native fire element with the energies of luxury, elegance, and wealth. ” that explains why I had the energy to get shit done while staying grounded and practical.

Now quartz is generally cleansing and energizing. Its a stone that works for any purpose, and is often used to amplify the energy of any stones nearby or whatever magic you’re doing. Which is probably why I got a bunch of stuff done today and managed to stay focused. Finally, the moon is in Aquarius and air signs are always about intellect, knowledge, and thought which makes it a good day for research.

Even though I could find this info myself, I probably wouldn’t have. Like I said, that’s a Tuesday shirt and there’s no such thing as a Sunday bra. I probably would have watched High School High in my underpants in a messy living room and scrambled to get stuff done all week. Thanks for the boost, Laurie!

Tomorrow I’ll be wearing orange, a colour that I know for a fact I look terrible in and getting a bit creative. Bring it on, Monday.

Monday, March 7: Wear Orange. Write a ritual. Do not cast a spell today.